If you were asked, “Should the Federal Government excavate 4 new parallel train tunnels under Baltimore to allow trains carrying passengers in the near term and hazardous chemical tank cars and massive double-stacked freight in the long term?"  would you say, “yes?” When fully constructed, up to 388 trains per day will continuously thunder beneath residential neighborhoods, with freight trains  spewing unfiltered diesel pollution near our schools and shaking our foundations. Days and nights will be filled with screeching brakes and train horn blasts.

Reviewing B&P Tunnel route at a RATT meeting at Easterwood Recreation Center
​​The B&P Tunnel project (recently renamed the Frederick Douglass Tunnel) is an enormous, destructive, dangerous use of $4 billion (phase 1) of federal tax money for corporate profit. Residents Against The Tunnels (RATT) is a group of Baltimore citizens with a single mission: to say, “No! Find a better way.” We want to raise awareness to block the planned B&P Tunnel project as described in the 2017 Record of Decision, and send the Federal Railroad Administration and AMTRAK back to the drawing board. We demand a solution that places a priority on the safety, health, stability, and future of Baltimore citizens. 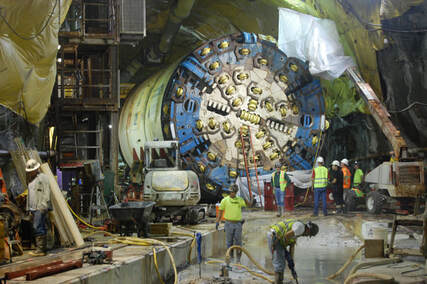 A Tunnel Boring Machine (TBM)
RATT is very concerned about possible damage to West Baltimore homes and businesses during construction of the tunnels. Huge Tunnel Boring Machines (TBMs) will drill the parallel bores, moving at a rate of about 30 feet per day. We have been informed that we will not want to be in our homes during the drilling due to the terrifying noise and vibration. There have been many incidents worldwide of building and street collapse and cracking, and even deaths, due to use of TBMs. In addition, controlled explosives will be used under our 19th century brick homes to create escape routes for these new tunnels. No study was conducted regarding specific risks these methods pose to 100+ year old Baltimore rowhouses, many of which are already in fragile condition. 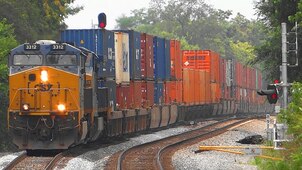 A CSX double-stack freight train
Regarding use of the tunnels, the public is being sold a bill of goods for this project, which focuses attention on passenger trains while trivializing the secondary freight objective. These tunnels have been designed and we anticipate that at least 2 tunnels will eventually be constructed to accommodate double-stacked freight trains. Over time, this will likely result in significantly increased freight transport through Baltimore. Make no mistake. This is also about freight.
​
​

Quality of life in West Baltimore matters.
We understand the need to improve passenger travel and deliver crucial freight to the port of Baltimore, but we object to the current plan, which ‘railroads’ over concerns for Human Safety, Air Quality, Environmental Justice, Structural Stability, Future Development, City Livability, and Residential Rights. This affects ALL of Baltimore while being inequitably detrimental to low-income minority West Baltimore Neighborhoods.

This is a complex story that impacts Baltimore’s entire future. There are alternatives that were not considered. Please join us to insist that these be explored. A modern and comprehensive rail plan for Baltimore is needed.
Site maintained by eDirect Web